In the province of Cremona, in Paderno Ponchielli, there is Cascina Feniletto, where Federico Dizioli has a farm of broiler breeders. With the owner, who has been a Prinzen customer for almost twenty years, we retraced the history of Ovoset Pro.

Federico Dizioli's farm covers 120 hectares, on which he raises broiler breeders, cattle and pigs. The surrounding land is cultivated with cereals, which are used to feed the livestock, while a part is used to grow industrial vegetables.

Currently, 75,000 breeding birds are reared on the farm, divided into 6 sheds. "The chicken breeding centre was set up in 2000," explains Federico Dizioli. "Right from the start, we realised that collecting eggs at the front of the shed was a dispersed process and we decided to channel the eggs into a real centralised collection centre, which at the time was essentially a manual egg sorting bench. In those years we started talking with Prinzen of the Vencomatic group, a company from which we bought our first machine in December 2004, immediately after its world premiere at the Verona Fair.

The Ovoset Pro is the highest performing machine in Prinzen's portfolio, both in terms of performance (it has a capacity of 30,000 eggs per hour) and flexibility of use. "Since the first version we purchased, things have changed a lot. Not so much in terms of the operating principle, which is similar to the current one, but in terms of the major improvements that have been made," continues Federico Dizioli. "Thanks to the communication channel opened with Prinzen, we have been able to meet the needs of farmers who, because they serve two or three different types of hatcheries, needed to change the setter trays that were commercially required by the hatcheries. The option was already there, of course, but it was more complicated. Ovoset Pro made the real revolution with complete automation. Today, the transformation of the machine takes place with the help of a pantograph and the entire operation is carried out without the use of keys, using just a few buttons. Without changing the set-up, it is possible to change the setter trays and deliver the eggs to the different hatcheries." 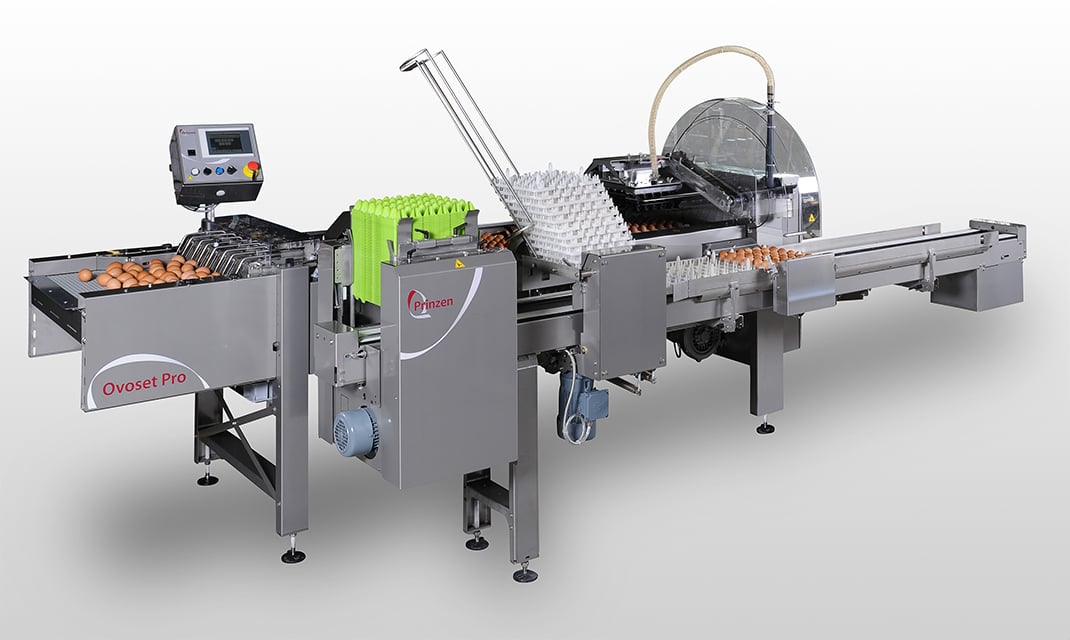 With its simple and concise information to switch between setter trays, the Ovoset Pro is the answer to the modern needs of the broiler breeder farmer, allowing accurate and gentle placing of hatching eggs directly onto the setter trays, which are automatically handled and positioned for egg transfer and setting. The machine offers excellent control over the entire process and the stainless steel construction makes cleaning a quick and easy operation.

One of the strengths of a Prinzen machine is service, which in the case of Federico Dizioli's company is provided by Tezza s.r.l., one of Vencomatic Group's Italian dealers. "We bought the latest model three years ago: it works well and has never given us any problems. Thanks to external support via video call, we were able to manage every little thing. In addition, we have put the machine in remote control, so that it can be controlled from both the Dutch Vencomatic headquarters and the Italian dealer Tezza. I consider this type of support very important: the software communicates remotely and from the headquarter it is possible to interface with the machine on the teritory. In this way, the farmer can really manage the farm without limiting himself to egg collection, which is undoubtedly a fundamental moment, but in which the farmer's role cannot be exhausted. The fact that the egg is fertile and hatchable is something that does not depend on the machine, or only partially, but above all on the rearing conditions," concludes Dizioli. "The Ovoset Pro Prinzen helps us to do just that: to manage collection in the best possible way, quickly and efficiently - thanks also to the 99.7% Point Down Setting that maximises egg hatchability - leaving us time to concentrate on managing the farm.

This article was printed in Zootecnica.

This is our After Sales Team in Asia

AMR and the Van Gent nest: "Good hygiene starts in the nest".