The Dutch journey to cage free

This article is written for the Kikoushobou Poultry Magazine, as part of a series by our colleague Susanne Vonk. Our 'Cage Free' booklet is based upon these articles.

In the 19th century, Dutch farms were mainly small mixed companies. Farms produced mainly crops on the land and had a few sheep, pigs, a cow and chickens. They produced for their family and sold everything what was not needed for feeding their own family. It was a more circular agriculture system.

Due to a large increase of imported grains from the US and Canada during 1880-1895, the prices of crops reduced drastically in Europe. This period is known as the agricultural crisis and the strategy to get out of this crisis differed per country (Swinnen, 2009).

Many countries imposed import tariffs to protect their own farmers, but the Netherlands (together with Belgium and Finland) responded by transforming its agriculture. They considered that the only strategy effective against these low prices, was to modernise and move towards livestock production.

More animal production and the export of agricultural products became a further growing market, due to the good location of the Netherlands with major rivers like the Rijn and Maas (Minderhoud, 1935).

When the second world war came, everything changed. There was a shortage of feed in the Netherlands and also the export market had collapsed. The South of the Netherlands was freed in September 1944, but the North and West of the Netherlands remained occupied. Because the coal and feed could not be transported to these regions (de Jong, 1969), the people were forced to eat sugar beets and tulip bulbs (see figure 1). This period is known as the Hunger Winter and caused a national trauma.

Figure 1: Women are pealing flower bulbs to use in soups and other meals (NIOD).

After the war, Sicco Mansholt became minister of agriculture in the Netherlands. His motto was “Hunger - never again!”. Mansholt developed an agricultural policy aimed at increasing productivity on our own land, so that food was easily available and affordable.

Food production increased from approximately 15-20% of domestic demand to 200-300% at the end of the century (Paul, 2011). The Dutch landscape changed into an efficient production landscape. Small mixed family farms became large specialised companies with focus on export. The number of farms decreased from 410,000 in 1950 to 53,000 currently and the average size increased from 6 ha to 32 ha (CBS, 2021).

At the same time, Mansholt wanted to improve the wellbeing of the farmers and their families. Horse and wagon were replaced by tractors during the start of the mechanisation (1950), so farmers could achieve more with less labour. Many subsidies were released and farmers received fixed prices for their products, so they had a steady income and more chances to invest. The productivity of the animals and crops were also increased by genetic selection, improved housing and nutrition and the use of artificial fertilizers.

When the amount of food is not a problem anymore, people get more attention for the quality of their food. You can see this in figure 2, which shows Maslow’s Hierachy of Needs applied to food (Satter, 2007). At the lowest level are the basic needs for humans to survive (bread, potatoes), which is just about having enough food to eat with no attention to quality. The next level is about safety, having food that contains the needed nutrients and vitamines. This level also looks at security, having a continuous supply of food that is safe to eat.

The next level describes esteem, respect and appreciation. This is usually the moment that meat and animal products are introduced in the diet. When people have more wealth, they make the change from a plant based diet to a diet with meat consumption (Delgado, 2003). This is also the reason why meat consumption has increased worldwide (figure 3), because of the economic growth of many developing countries. The top level is about self actualisation, people want more luxurious food such as cakes. These types of food are usually not healthy, but are mainly focused on desire. During the last 70 years, we made these steps in The Netherlands and most people can afford food up to the highest level of luxury.

At first, animal welfare regulations were mainly focused on regulating the excesses and creating a standard for animal handling. From 2000 onwards, the public became more critical about animal welfare. Outbreaks of for example avian influenza made society more aware of the large amount of animals that were kept on the intensive farms (Magdelaine et al., 2008). The change towards systems of high animal welfare continues, which requires involvement of famers, industry, supermarkets, consumers, government and animal welfare organisations.

Farmers want to change their production method, but they need a sufficient income. Consumers want to eat high quality food, but do not want to pay too much (Clark et al., 2017). Pressure on the farmers comes on the one hand from food brands and supermarkets, which caused public debate and influence of animal welfare organisations. Supermarkets and food brands want to have a sustainable image, so they change their marketing strategy (Hartcher & Jones 2017). Therefore, they often force a change in products and the farmers have to adapt to produce these products of higher standard. The industry needs to make sure that farmers are guaranteed to sell these products at an additional cost.

On the other hand, the government also increases the pressure on farmers by raising the minimum requirements for animal husbandry. The traditional cages for laying hens are forbidden in the EU since 2012 and the enriched cages are forbidden in The Netherlands since this year (2021). The government supports farmers who are changing to cage free systems. Supermarkets are not allowed to sell cage eggs anymore.

So the total process to the production of cage free eggs is a dynamic process and all parties need to join. I dare to say that in the future, all cages will be banned worldwide. If your region is starting with this transition (see figure 4) , make sure to increase awareness and start talking with all the stakeholders. The transition cannot be stopped, so join it and make sure you create the most optimal situation. 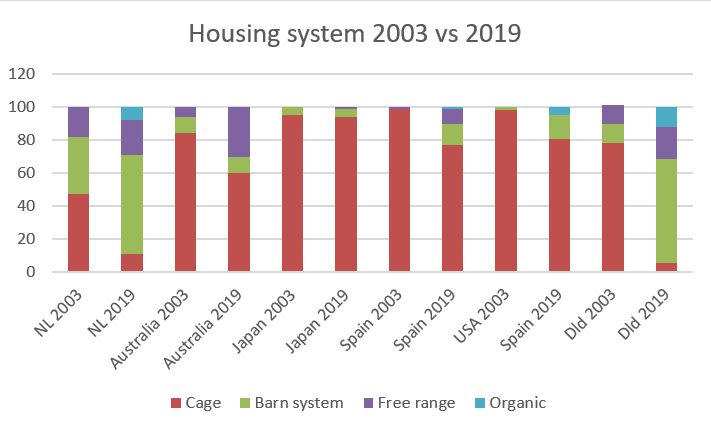 With thanks to Anne van den Oever MSc for editing.

Knowledge Manager
Back to Blog

Are you considering going cage free with your hens? Simon will help.