On-farm hatching: everything you need to know

What is on-farm hatching?

With on-farm hatching, the eggs are hatched in the house where the broilers grow up. Food and water are immediately available for the chicks and there is no need to transport them; instead, the 18-day incubated eggs are transported. In addition to early feeding and water, hatching conditions and air quality are certainly critical for a good startup of the young chick.

The idea behind on-farm hatching comes from a few broiler farmers who had problems with hatchery chicks: a lot of variation in chick quality and start-up problems. Currently, on-farm hatching is mainly used in Northwest Europe, but it is now being rolled out to other continents.

99% of the eggs for broilers currently hatch in the hatchery. These chicks hatch in a cabinet, also called 'hatch cabinet' or 'hatcher'. After the chicks have all hatched they are collected, checked, selected and counted, after which they are transported to the poultry house.

An important difference is in the behavior of chicks that hatch in a hatchery or those that hatch in the house: hatcheries are dark, noisy and offer little space for the chicks compared to the broiler house where there is peace, a lot of space and a lot of fresh air

What are the options in on-farm hatching?

On-farm hatching was first developed by Vencomatic Group, integrated in the Patio. This is a multi-tier system where the climate system is developed in such a way that the environment is ideal for the chick during the entire life cycle, starting with the last 3 days of the brooding process.. The Patio was originally used as a rearing system for the first 10 to 18 days, at this age the young chicks are transferred to the grower houses. This ensures a good start and more chicks can be processed per year. Later on, the Patio is used more as a complete production system, in which the chicks stay for the entire cycle from moment they hatch until they reach slaughter weight. 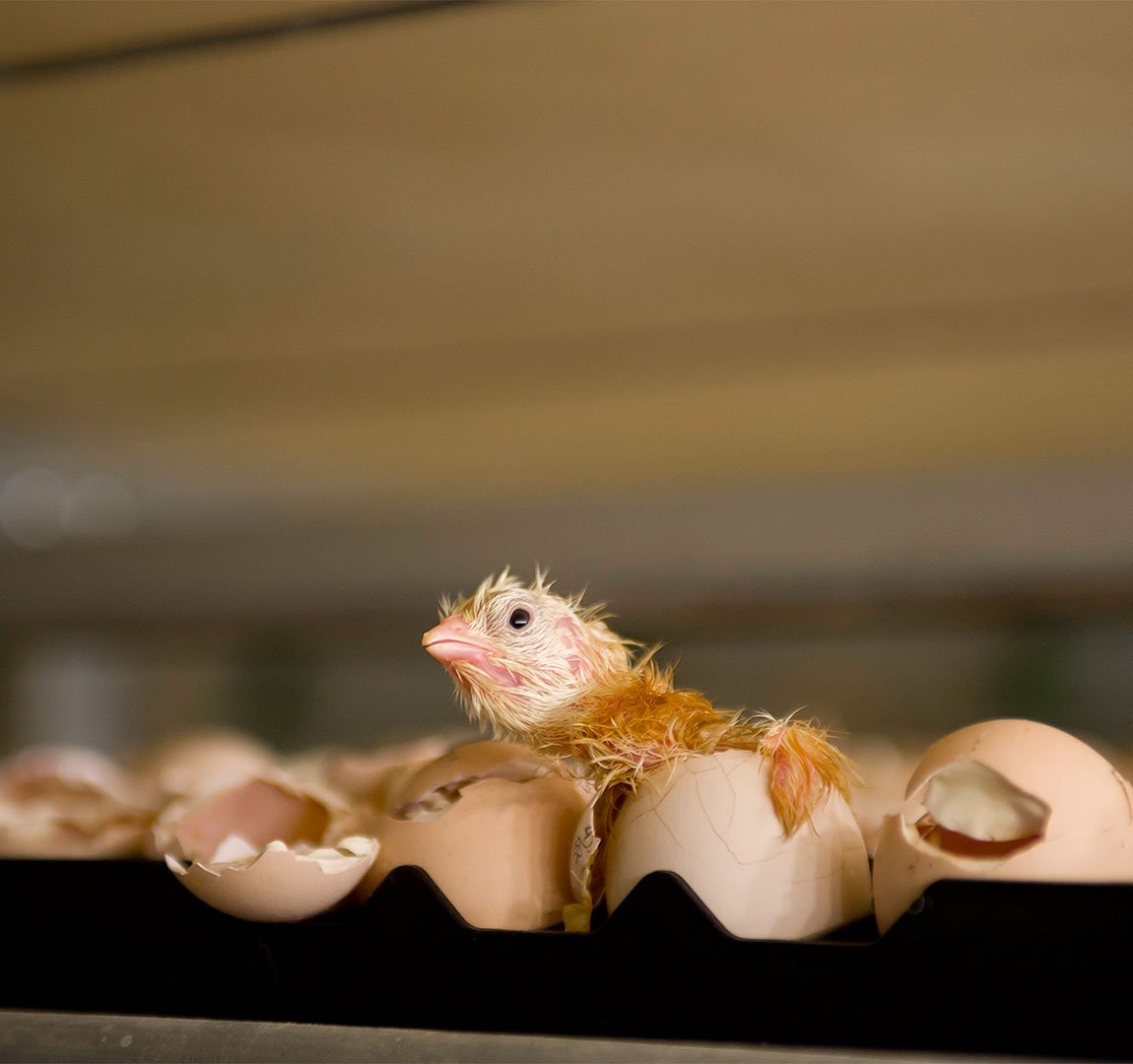 Since on-farm hatching in practice led to continuously improved results compared to traditional production systems, the request came to apply on farm hatching also in standard floor houses. The X-Treck was developed for this purpose, a system to be applied in traditional broiler houses (like at this farm).

What does 'hatching (chicken) eggs' mean?

Hatching means the last 3 days of the incubation process. Chicks hatch in a range of 36-48 hours, depending on breed, age of the mother birds, storage time and pre-breeding process. In a normal incubation process, all viable chicks have hatched after 21 days.

Hatching and 'brooding': what is the difference?

Hatching is the hatching period (the last 3 days of incubation), brooding is the period from day-old chicks to the age of 7 to 10 days. This is a very important phase of a chick's life, when it is important to provide the chick with the most important conditions for rapid and optimal development. In the market, an on-farm hatching system such as X-Treck or Patio is the best way to combine these two phases.
What is important with on-farm hatching?

If you want to start on-farm hatching, the climate control of the house must meet basic requirements for the broilers. When the chicks hatch, the conditions must be ideal: the temperature must be as homogeneous as possible in the house and the concrete floor needs to be warm enough to prevent the young chicks cool down too much. To achieve the ideal conditions, an intermediate floor is placed under the hatched eggs that assumes the ambient temperature, so that the newly hatched chicks are accommodated on a warm surface. Sometimes humidification must also be present, especially in a short cleaning period or when time is limited, this is a strong plus.

The hatching eggs are supplied on standard setter trays, where the eggs can be either candled or directly transferred to the broiler house without candling. When the eggs are candled, it is easier to estimate how many chicks are present at the start.

An important point of attention is that the eggs do not get too warm during on-farm hatching, cooling down for a while is less harmful than too warm. Too warm causes chicks to hatch too soon when they are actually not yet fully grown.

How does a hatching machine work?

A traditional hatching machine has several functions: heating, cooling and ventilating to maintain humidity and carbon dioxide levels. Since a large quantity of eggs is placed in a small space, it is very precise and specific to optimize the conditions for each egg in the hatchery. When applying on-farm hatching, an important difference is the volume per egg placed: 34 litre per egg compared to 1 litre per egg. Also after hatching, the density of chicks is lower, this ensures that the conditions in on-farm hatching are better: lower room temperature, lower relative humidity, lower carbon dioxide levels, lower dust concentrations and a lower air velocity, since cooling is not an issue. The total process is easier to control.

Hatching without an incubator

There are other ways to hatch. Especially if you are going to invest on a large production scale, it can be smart to set up your own hatching plants. You can especially save a lot of costs in the last days of hatching. However, this kind of investment is only interesting when it comes to completely new production facilities: if you already have hatchers, the biggest investment has already been made.

For an integration that controls all steps in the production chain, it is interesting to consider investing only in the setters brooding till 18 days and switching hatch cabinets to on-farm hatching. In a traditional hatchery, a lot of technology is needed for the hatching phase, such as process handling machines and cleaning machines. In addition, this is where most of the labor is needed, so much can be saved. By setting up the production chain in a different way, considerable savings can be made in terms of investment.

Can hatching eggs be washed?

A hatching egg cannot be washed from the inside, but also from the outside it makes little sense if it has become dirty. When the egg is laid by the hen, it is at body temperature; within 5 minutes of being laid, the egg cools to ambient temperature. At that time, the air chamber is formed. Because of the temperature difference, there is negative pressure inside the egg, which sucks in any bacteria that are on the outside of the porous shell. During the incubation process, these will multiply and infect the embryo. The hatch rate will be 20% lower and the quality of the day-old chick will deteriorate significantly.

Product manager
Back to Blog & News

From science to practice at Vencomatic: "Sharing knowledge is very logical".

On-farm hatching: the importance of the height of the hatching eggs